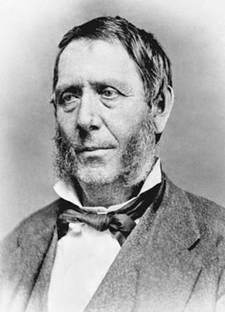 He has an Iowa community college named after him as well as a town in Illinois, a hotel in Des Moines, an elementary school in Coralville, and streets in both Iowa City and Davenport. His sculptured likeness is maintained among the two coveted statues apportioned to each state on display under the rotunda in Statuary Hall in the United States Capitol in Washington, D.C. He led Iowa through the tumultuous days of the Civil War, and later became a U.S. senator and the Secretary of the Interior. His name? Samuel Kirkwood, and courtesy of Ottumwa attorney, Rich Gaumer, Kirkwood will be making an “appearance” at the Ottumwa Public Library’s Reminisce Society on Tuesday, May 22, at 10:00 a.m. in the library’s meeting room.
Gaumer, who is president of the Ottumwa Civil War Round Table and an avid student of Civil War history, will portray Iowa’s Civil War governor as he faced the challenges that the War Between the States brought to our state and nation. Adopting Kirkwood’s persona, he will entertain listeners with stories not only of Kirkwood’s Civil War years in Iowa, but also of his life and subsequent service in the U.S. government.
Reminisce Society programs are free and open to the public, and are held the 4th Tuesday of each month at 10:00 a.m. in the library’s meeting room. They are especially for those with an interest in local and Iowa history, but everyone is welcome to attend. This will be the last Reminisce Society program for the season; the Reminisce Society will be taking a break for the summer, and all new programming is scheduled to begin in the fall. For further information, please contact the library’s Reference Desk at 641-682-7563, extension 205.
Email ThisBlogThis!Share to TwitterShare to FacebookShare to Pinterest
Labels: history, iowa, kirkwood, reminisce_society
Newer Post Home