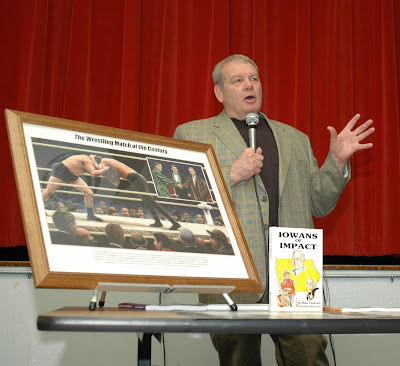 It’s a compelling look back at the people who have made Iowa so remarkable and is a speech that is designed to create interest among young students and senior citizens alike. A native of Waterloo, Iowa, Mike Chapman retired from a 35-year newspaper career in 2002, his last job as publisher of the Newton (Iowa) Daily News. He has written 30 books and his articles have appeared in dozens of national and regional magazines. He has also been named National Wrestling Writer of the Year five times and is a member of 11 halls of fame.

The Reminisce Society’s programs are free and open to everyone. If you are a person with a disability who requires special assistance or for further information, please call the library’s director, Sonja Ferrell at 641-682-7563, extension 202.

Presented at the K.C. Hall